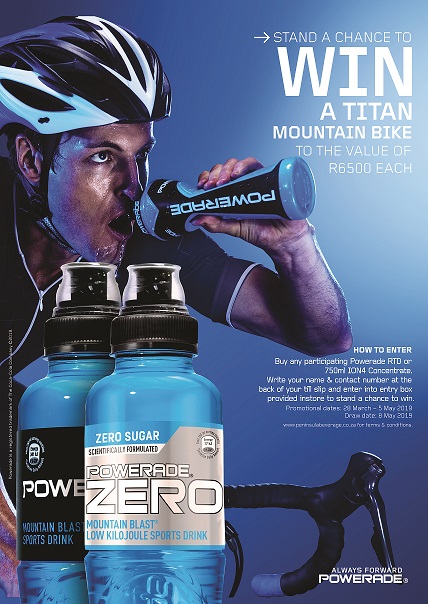 1. This Promotional Competition (“Competition”) is organised by Coca-Cola Peninsula Beverages (Pty) Ltd franchise bottler of The Coca-Cola Company in the Western Cape (‘the Promoter”).

2. The Promotional Competition is open to permanent residents and citizens of South Africa over the age of 18 years in possession of a valid South African Identity Document (“Participant/s”)except any employee, director, member, partner, agent or consultant or any person directly or indirectly who controls or is controlled by the Promoter and/or immediate family members of any employee, director, member, partner, agent or consultant of or person indirectly or directly in control or controlled by the Promoter, their advertising agencies, advisers, dealers and suppliers and Bottlers of beverages identified by the trademarks owned by or licensed to The Coca-Cola Company, its affiliates and/or associated companies (“Disqualified Persons”).

4. This Promotional Competition commences on 28th March until 05 May 2019, both days inclusive (“Duration”).

5. One lucky Participant stands a chance to win (1) one Titan Mt Bike and accessory valued at R6500 (Prize). Accessory include 1 (one) helmet, only.

6. To stand a chance of winning this Prize, Participants must purchase any 750ml Powerade Ion4 Concentrate, 500ml Powerade Ready to Drink Regular or Zero (“Participating Products”) at Superspar Haasendal Kuils River, Western Cape (“Participating Store”). The Participant must write their name and number on the back of their till slip and drop it in the entry box provided (“entry”). The draw will take place on 08th May 2019 (“Draw Date”) and the winner will be contacted telephonically.

8. Participants, whose entry has been drawn and have been confirmed as valid after the verification process, will be notified telephonically within 2 (two) days from the Draw Date and declared a winner.

9. Participants may enter the Competition as many times as they wish provided they purchase the Participating Products each time and complete their entry as set out in clause 6 above.

10. Participants may not enter this Competition or be a winner if they have won a competition promoted by Promoters within the past 6 (six) months.

11. Entries which are unclear, illegible, are submitted via an incorrect entry mechanism or contain errors or from Disqualified Persons will be declared invalid.

12. If the Promoter are unable to reach a potential winner in terms of clause 8 or fails to complete the verification process after drawing his/her entry for whatsoever reason, such person will be disqualified and the draw of a replacement winner will be drawn.

13. The Prize is neither transferable nor redeemable for cash and the Promoter are not liable for any defect in the Prize. The Promoter reserve the right to substitute Prizes with any other prize of comparable commercial value.

17. The Promoter may require the winner to complete and submit an information disclosure agreement and indemnification to enable the Promoter to ensure compliance with these rules and the Consumer Protection Act 68 of 2008. Should any winner refuse or be unable to comply with this rule for any reason, such winner will be deemed to have rejected the Prizes and it shall revert to the Promoter.

18. The Promoter may require the winner to be identified, photographed and the photograph published in printed media, or to appear on radio and television, when accepting their Prizes and/or after having received their Prizes. The winners will be given the opportunity to decline to the publication of their images and to participate in the Promoters’ marketing material in so far as it relates to the Promotional Competition.

19. All queries in connection with this Competition should be directed to Sune Kieson 021 936 5577