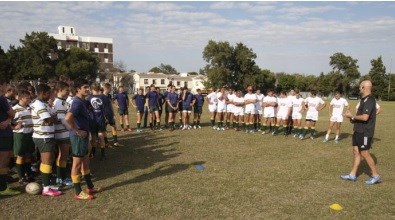 The under 14a, 15a, 16a and first team rugby players at Tygerberg High School in Cape Town were treated to an epic training session with former New Zealand rugby coach, John Mitchell. The Western Cape school was one of 50 rugby playing schools that took part in the Powerade Collect a Cap competition where they stood a chance to win a Powerade Performance Session with Mitchell.

Tygerberg High School was one of five schools from around the country to host one of these training sessions with the famous disciplinarian who is well known for his commitment in developing rugby talent.

Tygerberg’s first team coach, Gavin Beresford says, “The learners were so eager to win the competition that they searched and collected Powerade bottle caps from everywhere, including the bins. When we were told we had collected the most Powerade bottle caps in the Western Cape and that John Mitchell will be training the boys, the first question they asked was “what should we wear coach” – that’s how excited and nervous they were.” Beresford believes that hard work always beats talent, unless talent works hard too.

Marketing Activation Manager, Dan Davis at Peninsula Beverage Company (PenBev – local bottler and distributor of The Coca-Cola Company products, which includes Powerade, in the Western and Northern Cape) says, “I’m proud of Tygerberg High School for their dedication to the competition – as a former rugby captain of the school myself, I understand the boys excitement about being given the opportunity to learn from such a talented coach. We at PenBev are incredibly proud to be able to contribute to the active healthy living of learners through our involvement in sport and sports development.”

Malefetsane Mbele, Marketing Assets Manager of Coca-Cola South Africa explains, “We recognise that there is power in every game and through the programme, born sportsmen are being introduced to the science of correct training, proper nutrition and the benefits of hydration to enable them to reach peak fitness at the right time. Coaches and players are being advised on how to overcome adversity and be instrumental in helping to inspire their teammates and gain admiration from their families and communities. This encompasses Powerade’s ongoing support of providing born sportsmen with platforms to improve their sporting performances.”