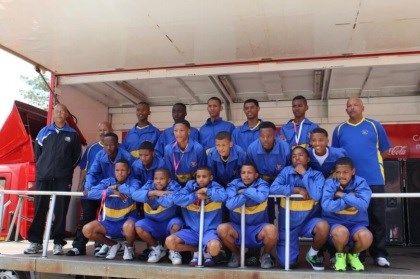 The finalists will show off their talent at King Zwelithini Stadium in Kwa-Zulu Natal from 17 – 19 October 2014.

The COPA Coca-Cola u15 National Football Tournament is known as one of the best platforms for talent identification in South African football development structures. The aim is to create the world’s largest and most inclusive football grassroots program. Peninsula Beverage Company (PenBev - local Western and Northern Cape bottler and distributor of The Coca-Cola Company products) is tasked with implementing the COPA Coca-Cola tournament in the Western Cape.

PenBev’s Marketing Activation Manager, Dan Davis comments, “We are so proud of Robinvale Secondary School for making it to the finals. As a national tournament, competition is fierce so well done guys for making it!”

Davis continues, “We invest in our local young sporting talent to help them reach their goals and dreams. We hope that with our support, South Africa’s rising stars are given the chance to shine.”